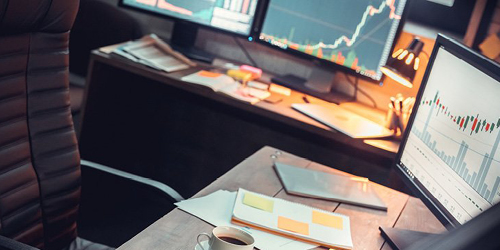 The US Federal Reserve (the Fed) closed the year 2021 by commenting that the Federal Fund rate would rise after the end of the QE program, which is scheduled for March 16, 2022. At that time, about 3 rate hikes were planned for 2022. However, after the recent inflation figures (December 7% yoy), the Fed gave a different signal and the markets are now forecasting 7 rate hikes in 2022.

Regarding the European Central Bank (ECB), interest rates still seem calm at the moment. ECB President Lagarde has hinted that the central bank is likely to buy bonds at a monthly rate of EUR 20 billion as early as the fourth quarter of 2022. In fact, this purchase program has no official end date. Importantly, as long as the ECB buys bonds, interest rate hikes are out of the question. So far, the ECB maintains its view that the current high inflation is temporary.

The influence of key rates

The change in the central banks' strategy regarding their policy rates has a direct impact on short-term interest rates. Traditionally, short-term swap rates are very sensitive to the prospect of rate hikes or cuts. It is therefore no surprise that Czech and Hungarian short-term swaps have risen significantly. For example, the one-year Hungarian swap rose from 1.02% in May to 5.32% today. To a lesser extent, US and UK swap rates have also increased. On the contrary, the euro-zone 1-year swap rate was flat for much of 2021 and has only recently started to improve a bit.

The interest rate adjustments in the monetary policies of the various central banks have a major impact on the FX forward market when hedging foreign currencies against the EUR through an FX forward contract. The number of forward points increase significantly when one of the higher-yielding currencies is hedged against the EUR. For example, the number of forward pips for hedging USD against EUR for a 12-month period was 92 (0.0092) at the start of Q4. Due to increasing interest rate differentials between the US and the eurozone, this has risen to 165 (0.0165) at the end of January 2022. This represents an increase of 79%. Before hedging GBP against EUR, the number of pips also increased significantly. The number of forward pips on a 12-month hedge increased from 83 at the start of the fourth quarter to currently 133 forward pips, an increase of 60%.

The differences between the central bank's interest rate policy have a significant impact on currency hedging through the use of forwards. The slow ECB action against the faster action of other central banks has led to a disadvantage for parties (exporters) which sell the foreign currency against the EUR in the future. On the other hand, parties (importers) which want to buy the foreign currency in the future have an advantage. They get more foreign currency for every EUR due to the high number of forward points (irrespective of the development of the spot rate). This situation may remain until central banks' interest rate policy diverges to a lesser extent than they do now. This is not expected to be the case anytime soon.

Good FX risk management can eliminate a large part of these Non-Core financial risks for companies. The first step is always identifying the different types of FX risks. The next step is neutralizing these risks on time with the right financial hedging instruments. A good cash flow forecast is essential for an adequate analysis.

FX risk management is often complex. Profound knowledge of the financial markets and available hedging instruments is essential for successfully protecting the company. Would you like to know more or are you interested in tailor-made treasury advice? Please contact the Treasury Desk.